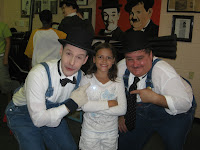 Back in October 2007, we took a trip to Harlem, Georgia, the birth place of Oliver Hardy, for the 19th Annual Oliver Hardy festival (Travel Diary: Harlem, GA: Oliver Hardy Festival).  One of the highlights of the trip was seeing the superb Laurel and Hardy impersonators, Jamie McKenna and Bill Leavy. Viola took two videos of them and uploaded them to Youtube (Laurel and Hardy Impersonators in Harlem) and in the intervening couple of years they have been a huge hit, with over 18,000 hits on the first and 10,000 on the second. hIt has been enjoyable seeing just how popular these short video clips have become.  If you haven't seen them yet, or would like to see them again, ere they are:

I am amazed that these great impersonators have not made a greater impact on the net. As far as I can tell, our youtube uploads are the only substantial ones of them (see also brief clips here from a 2008 convention), and the comments there confirm how impressed others are with these two men.