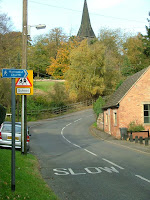 It occurred to me this morning that one of the problems with family memories of Christmases is that they are all so recent. At best they span a generation or two. When my Grandad, who died earlier this year, was interviewed last year for the local paper, he was able to share his memories of Christmas from the 1920s, with cockerel for Christmas day and more. Perhaps one day there will be interest in memories of Christmas 2008, long after we are gone. Perhaps, just as I enjoyed hearing my Grandad's memories, my grandchildren and great grandchildren will enjoy hearing mine. Or perhaps not. But either way, I like the idea of writing to them, further in the future than my future self, to whom I was writing yesterday.

I have no idea how traditional our Christmas is, but not a lot has changed since we were celebrating it in the same house when we were kids. And I still love it.

This was the third night since arriving, and the one when the jet lag set in. I felt like I was wide awake all night. Perhaps I was just reliving childhood Christmas eve excitement, and I could hear the sounds of nieces' footsteps on the landing while I lay awake. When we were kids, we used to open presents in our pyjamas, very excited, as soon as we woke up. Our nieces did that today, and loved their new bikes and mp3 players.

Most of us walked to church this morning (Blackfordby, above), nieces on their new bikes. It's a mile or so and a lovely walk, taking one across the Derbyshire / Leicestershire border, and passed the house where we lived when I was born. The service was a traditional Christmas eucharist and I enjoyed it immensely, even if the church was more than half empty. There were thirty-three people there, including the vicar, the organist and the choirgirl, and ten of those were our family. My mum stayed at home to get ahead with the Christmas dinner. My dad was the least well-behaved in the group, and his musical tie went off during the Gospel reading, John 1.1-18. It was just going into a second verse of "We wish you a merry Christmas" as "the Word became flesh".

My mum is an amazing cook and our Christmas lunch was fantastic, turkey, roast potatoes, roast parsnips, sausage meat stuffing, chestnut stuffing, brussel sprouts, sausages in bacon, bread sauce, lots of gravy. I take up residence by the sink for a couple of hours either side of lunch and get the washing up done. My brother-in-law provides the wine, always something special, and we finish the meal with liqueurs, mine a Cointreau. I think we must have sat down to eat after 2 because I was in the kitchen again, washing up, when the Queen's speech came on at 3. I'm not much of a monarchist, so I can take it or leave it, but I enjoy the sound of the Queen's voice as something of a Christmas tradition.

Present opening comes next, about 4pm or so. I remember the time clearly because I was relieved to see that we definitely had enough time to open presents before Doctor Who at 6. Our present opening session, going round in a circle, one at a time, resembles the way it was done in last night's Gavin and Stacey, so it looks like we may not be all that unusual. I had lots of fantastic presents, Kim Newman's "critical appreciation" of Doctor Who, Dave Simpson's The Fallen, all about his search for ex-members of The Fall, The Wedding Present Radio 1 sessions (complete), three Dad's Army DVDs, a book about Abba and Mamma Mia, and a Doctor Who DVD, "The War Machines". And other stuff like clothes and chocolates.

Happily, we were all done in time to get a cup of tea before Doctor Who began at 6.

But as I write, time is getting on, so I will pause there and complete the story tomorrow.

It would not be a real Christmas without the Queen's Christmas message. It is always inspiring to listen to her thoughts. And they are her own thoughts, not government spin.

Oh my, Selwyn in a musical tie!