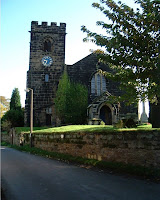 I don't think there is any such thing as Boxing Day in America. Shame. It's a fantastic tradition. Basically, Boxing Day is the same as Christmas day but without the presents. So just as much eating, drinking and enjoying yourself, but no presents to go with it. We had a bit of a lie in (= "sleep in" in American, in the unlikely event that any Americans are reading) and we needed it because once again the jet lag had kicked in big time last night, and I couldn't get to sleep until 4. I spent some of the extra time reading, some of it blogging, and most of rest of it lying awake thinking about the dating of Mark's Gospel and the evening's Doctor Who special.

At midday, my sister, my brother-in-law and I went for a four mile run. It incorporated Hartshorne (see pic.) and Manchester Lane, and I was well and truly knackered by the end of it, and still couldn't keep up with my sister. Still, I made a better show of it than when I last ran with her, and was pleased to have made the effort. When we got back the modern-day re-working of The Railway Children was on the telly on one side, and South Pacific on the other, but I didn't get the chance to watch either and instead helped with the preparation of a fantastic lunch which we ate quite late, more turkey and stuffing, beef (freshly roasted), nut cutlets (freshly made) and jacket potatoes and the like. Fullers London Pride to begin with, then another nice red, and liqueurs to finish (Tia Maria this time for me).

In our family, Boxing Day is the day for the slide show. This year, for the first time, it has gone digital and we have all provided photographs and videos and he has provided the digital projector. It was an excellent show, with bits of America as well as bits of England, Austria, France, Italy, and various members of the family in each place. The North Carolina contingent all looked very brown, I thought, and it was lovely seeing shots of summer and the swimming pool -- brought home just how much I hanker for it until May each year.

We ate pretty late, 8.30, 9ish, I think, and I helped my mum prepare it. We just drank beers or ciders, and watched an evening of telly about Bill Cotton, head of light entertainment at the BBC for years, who died this year. After the documentary, there was an episode of Morecambe and Wise, the Christmas Special of 1971, which featured two of the all-time classic bits, André Previn and the Grieg piano concerto (". . . not necessarily in the right order") and Shirley Bassey and the boot. I don't think I had ever seen them in situ in the actual programme before, and most of the rest of it was pretty ordinary. Next up was an episode of Bruce Forsyth and the Generation Game from 1973, which took me right back to my childhood. It was actually quite funny.

Several of us stayed up late, taking in some more port and channel-surfing. It's an enjoyable treat to be able to channel-surf British TV. And we went to be late deliberately, what with the jet lag still affecting us in strange ways.

And that's it for this year's Christmas day and Boxing day narrative. I won't bore myself with any more of this diary keeping for now, though it's a tradition I am tempted to try again at some future point. In the mean time, I will add my comments on the Doctor Who Christmas special and will then rest the Resident Alien blog for a bit.

South Pacific or The Railway ~Children - what a choice. I went to see South Pacific several times back in the 1960s when it was screened in Birmingham on a huge screen - in full Todd-AO. Wonderful. I took my girl friend to see it as well - and here we are over 40 years later.

Railway Children - the later version with Jenny Agutter this time as the Mother. Another child did 'Bobby' - and rather better I think than JA all those years ago. the final scene has the newer actress at the end saying 'My Daddy' the first time as a question - of shock of realisation - and then the recognition with the second 'My Daddy!' I just caught the ending, and the tears poured down my cheeks - yet again.