Watching the World Cup in America: the British Expat Experience 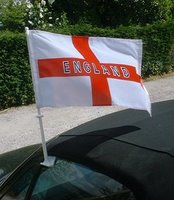 Good grief, it's here at last!  The World Cup starts today.  And just how excited am I, on a scale of one to ten?  Need you ask?

This is our second World Cup while living in the U.S.A.  Last time, I talked about World Cup Coverage in the USA and things look quite similar this time.  Here in the US, the coverage is not at all bad.  ESPN and ABC are sharing the coverage, as before.  You can catch every match, and everything is in HD. Quick, easy to see schedules available on the ESPN site.   All good stuff.

One key difference is that this time, England kick off with a match against, of all nations, the U.S.A.  So we had better batten down the hatches and take cover and just hope that we don't have the kind of embarrassment we managed in 1950, when we lost to the USA who at that point were still fielding amateurs.  So on Saturday, at 2.30pm our time, it will be "Come on England!", which is the way that the British say what in American would be "Go England!".

But how do you get the authentic English flavour when you are watching the World Cup in America?  It's not easy.  Being a football fan here is a bit like being a Doctor Who fan here.  It is well known enough for people to know what you are referring to, but not well known enough for anyone to have much in the way of actual conversation about the topic.  True, you might be lucky enough to meet one of the chosen few who loves football (or Doctor Who), but that is a rare treat.  It's a little bit like being a member of a cult.  Those flying the England flag in England are flying it now because they are cheering on England in the World Cup.  No question about it.  Those who are flying the American flag here at the moment are flying it because, well, because they fly it anyway.  The love flying the American flag here.

So to get a little taste of the English flavour of the World Cup in an attempt to feel at least a little connected, here is what we will be doing:

(2) Baddiel and Skinner's podcast.  I was delighted to discover this today.  Baddiel and Skinner have made the World Cup in the past, and the European Championships, and their Fantasy Football was a real treat.  Last time, they ran a series of podcasts for The Times which were essential listening.  This time, they are sponsored by Absolute Radio.  Already four are available.  You can guarantee that it will be poignant, insightful and most importantly, absolutely hilarious.

(4) The Guardian World Cup Daily will certainly be worth catching.  One preview episode so far.

Of course one of the curious differences about watching the World Cup over here is that all the timings are different.  Those settling down to the England match on Saturday will just have finished watching the latest Doctor Who (The Lodger), which by remarkable planning or remarkable good luck features some football (and Matt Smith did, let us remember, actually play for my team Nottingham Forest back in the day).  They will already have had a beer or two, and it will be getting dark outside.  For us here, it will be early afternoon, with sun blazing and shining through the windows.

For American viewers, at least for those of us over on the east side, the three match times will be breakfast (7.30am), coffee time (10am) and siesta time (2.30pm).  I must admit that I would prefer to be able to settle down in an evening to watch the odd match, but I like the variety.  The breakfast time slot is going to remind me of the Korea / Japan World Cup of 2002 when we were eating our breakfast cereal out of special World Cup cereal bowls -- which we still have.

I suppose one of the big differences this time will be the first Twitter and Facebook World Cup.  No one was on Twitter or Facebook back in 2006.  It's going to be fun to have that added element this time.  And it is going to make any attempt to try to DVR matches to watch later on pretty forlorn.  So I am just going to have to try to catch as much as I can live.

Oh, and of course it will be important to be singing along to some rousing England songs over the coming weeks, with Three Lions the top of the list.  I actually love the new (2010) version:

But of course we'll be listening to snatches of the original too.

I think I might be too excited to go to bed.

It is very exciting, though I don't know if I'll be able to stomach a USA win.

Regarding podcasts the Times Games podcast with Gabrielle Marcotti is always worth a listen. As is the Football Ramble, which in the interest of full disclosure, one of my close friends is on it.

Ah, thanks for the reminder about the Times podcast, and the other recommendation. Knee deep at the moment in Baddiel and Skinner and FiveLive but will probably run out at some point in the coming days.

As for the flying of American flags, June 14th is Flag Day after all.

Flag day? I'd never heard about that before. It does explain why Golden Corral was so full of flags on Saturday evening. We hardly dared to hope that it might have been for the World Cup. Drat!