Childhood Memories of a British Doctor Who fan 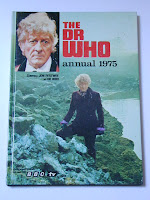 I was asked to give a short talk at our Doctor Who Raleigh meet-up group's Annual Banquet tonight and I thought I would share it here too. The topic I chose was my memories of growing up with Doctor Who as a child in England, something that will be a little foreign to most of the audience who have had their first experiences of Doctor Who here in the US.


To speak about being a "fan" of the programme as a child is not quite right because as far as I remember everyone watched Doctor Who. Well, everyone in my world at least -- my brother and my sister, my cousins, my friends, all the kids at school. And everyone except my mate Martin Staley's brother whose parents would not let him watch it because he had had a nightmare about the daleks. (What a punishment to be banned from watching Doctor Who! My parents were never so cruel). When we were younger, we played Doctor Who in the playground. When we were older, we chatted about it on the Monday morning as soon as we were back at school. It was the TV highlight of the week, and the cliffhanger ending made you ache for the next week's episode. 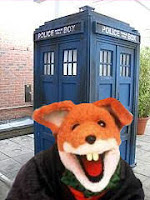 Now we all laugh at the special effects and the wobbly sets but it is a fallacy to think that no one noticed them back then. We knew that there were crummy special effects, but we thought that it was because it was a kids' programmme. Adult programmes, like the ones my parents watched -- Columbo, The New Avengers -- were generally on ITV and they clearly had far better production values. I thought that Doctor Who had slightly rubbishy production values because it was for kids, and the BBC were not going to blow all their limited budget on us. It was the best that there was for kids (though The Tomorrow People on ITV would have come a close second for me) but I don't think I ever thought it was a programme that adults watched. 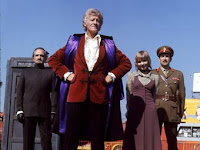 My first memories of Doctor Who are from around four years old. Jon Pertwee was the doctor and he will always be "my doctor". He took over in 1970 and my earliest memories of Doctor Who, perhaps a year or two after that, are of him in the role. Doctor Who had been in colour since 1970, since Pertwee replaced Troughton. I became aware, as time went on, that colour had not always been around. You might notice that right at the end of the credits in all these episodes is the proud declaration "BBC COLOUR". This was a big deal back then, a really big deal. My dad loved his television and he was one of the first people in the area to get a colour televisioin, and he was proud of it. When my sister was born in June 1969, my older brother and I were taken to a neighbour's house to be looked after while my mother was in hospital. I was two. It is family legend that I sat down and pointed at the television and said to my brother Jonathan, "Black one, Jo-than, black one!", clearly appalled that they had not got a nice new colour TV like we had.

I think I thought that the whole world was in black and white before I was born. I remember asking my parents "When did everything become colour?" "Oh, very recently," they said. "Just after you were born." Gosh, I was lucky to be able to see colours everywhere when people used to see only black and white. 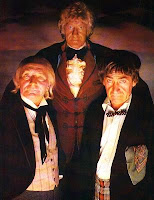 I was born in 1967, and apparently the "Macra Terror" was the Doctor Who that was on at that point, a Patrick Troughton (second doctor) adventure, all four episodes of which are now lost. But I never knew the second doctor. I can vaguely remember watching "The Three Doctors", the tenth anniversary adventure, in 1973, and being fascinated by it, but it served to confirm my opinion that Pertwee, the third doctor, was indeed the best. There was something calmly authoritative, kind but paternal, gentle but strong, that I found hugely appealing about Jon Pertwee's portrayal. I loved the earth-bound adventures, Jo Grant, Bessie, the Brigadier.

It was around this time that my father took me to Longleat House, near Frome in Somerset. He used to go down there from time to time because of a Lewis Carroll exhibition. But there was a huge bonus for children who were visiting -- Longleat House was the home of the Doctor Who Exhibition. Visiting it was a real thrill. You entered the exhibition by means of a TARDIS that looked like it just happened to be sitting in the back courtyard of the stately home. You opened the doors, and there was the console room, exactly as it should look, and with tons of buttons to press. I had always wanted to press those buttons in the TARDIS console room; I think the thing I most liked about Star Trek was all the buttons for pressing on the bridge and imagining what fun it must be to be Captain Kirk and have buttons in the arms of your chair! Being in that console room made such a marked impression on me that I can't remember anything else about the exhibition at all, although a close friend of mine, some years later, built a Dalek and took it there to display.

The difficulty about growing up with a show that you love is that eventually adolescence arrives. Unluckily for me, that phase of life happened at about the time that the programme dipped in quality, at least as far as I was concerned. I had already got tired with K9, I felt that Tom Baker had stayed in the role for too long, and it was hard to come to terms with Tristan from All Creatures Great and Small becoming the Doctor. I remained loyal, but now I was the only one in the family watching it, and it had moved away from its proper home, Saturday nights, to Mondays and Tuesdays, which felt to me like an admission of the decline in quality. I will admit that Sarah Sutton's Nyssa did just keep the adolescent's interest there, but it was not long before I'd be off to university, Colin Baker would become the doctor and, as far as I was concerned, it was like late Laurel and Hardy, only a shadow of its former self.

There were still flashes of restored enthusiasm, but they were few and far between. I quite liked Sylvester McCoy's seventh doctor in the late eighties, "Remembrance of the Daleks" was the first story to make any memorable impact on me for a while, and I was a little sad when the guillotine fell. But I was only a little sad. By the time it came back, for that one glorious evening in May 1996, I was a dad, and I was ready for Doctor Who again. I'm still fond of that Doctor Who movie and think that Paul McGann could have been a great doctor.

Perhaps its renewed failure was for the best, though, because the return in 2005 was triumphant. Now I was father of two, and the kids, then seven and ten, loved the new series straight away. Christopher Ecclestone was their doctor just as Jon Pertwee had been mine. The same year we moved to America, and after wondering how on earth I'd manage without the cricket and Radio 4, I began to worry about how we would cope without Who. I did not need to worry, of course, and enjoying Doctor Who in America provides a link with home, a way of remembering my roots and celebrating what's great about being British.

Nice memories, Mark. I try to imagine what my childhood would have been like without Doctor Who (I was born a year after you, but didn't start watching it until Tom Baker, who will definitely always be my Doctor)... a lot of missed magic.

It's strange reading how much a part of British childhoos Dr Who has been - I grew up in the late 80s and early 90s, so nobody at my school watched Dr Who - most of the time, it wasn't on. I saw the 1996 movie, and likied it a lot, and Paul McGannn will always be my Doctor. But the only shows all the kids at school watched were things like Neighbours (and probably Grange Hill, but being a weird kid, I didn't watch that). My brother and I are both Trekkies - while there wasn't Dr Who, TNG was in its heyday. I spent my teens watching American imports on Nickalodean too. It is rather weird being in the middle of two generations raised on Dr Who!

I love your article! I grew up in the U.S. but we had Public Television and the PBS in Nebraska showed 'reruns' of Doctor Who from when I was about six up until I was about 14 or 15. We didn't have cable nor a dish, so all we had on our little ranch was what we could get with our antenna: NBC, PBS and sometimes ABC (when the weather was good). I watched a lot of PBS because that was where most of the kids shows were at the time. They also showed a lot of BBC shows including Dad's Army, Allo Allo and Doctor Who. I was already a big sci fi fan even at the age of six so I loved Doctor Who. I remember being a bit scared of some of the monsters when I was younger. I still enjoy watching it on DVD and reading Doctor Who books. With Doctor Who and some of the other British shows on PBS, my sister and I were exposed to a little bit of another culture in another country and we were fascinated by it. The characters on All Creatures Great and Small, Faulty Towers and Masterpiece Theater and the other BBC shows we saw were so different from the mid-western cowboys and ranchers in our community. We even used to try talking with British accents and using British slang. It was a lot of fun! A lot of the other kids at my school did not watch PBS, so they didn't know about Doctor Who. Most of them didn't like science fiction either so they thought I was a little bit strange I'm sure. I even carried around some tractor parts that I had screwed together to make what I thought looked like a sonic screwdriver :). Now, I have a "real" toy one (the one that has a UV light in the tip)and makes the sound effect. I would have traded almost any toy I had for one of these when I was a kid) that I carry in my computer repair kit. It's fun to get it out and pretend to use it to repair customers' computers. It's quite a conversation starter and ice breaker.

Thanks -- I really enjoyed your comments.