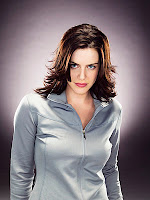 On Exploring our Matrix, James McGrath reckons that the new, reimagination of The Bionic Woman, which premiered on NBC in the USA last night, is "off to a decent start, with characters that have the potential to enchant us and draw us into their stories, and keep us glued to the TV night after night". We thought so too -- a very promising start. Jamie Sommers's reaction when she first wakes up, about half-way through the episode, was a great moment. Sommers is played by British actor Michelle Ryan who is doing a Hugh Laurie and using a very convincing (to me, at least) American accent. She was most recently seen on the short British series Jekyll, written by Doctor Who writer Stephen Moffatt. (It only took me a couple of links to get it back to Doctor Who). Ryan was excellent; I am looking forward to more. One disappointing element: they have pitched the series at an adult audience where the original was a family show. The reason that 30 and 40 somethings are tuning in to watch this new version is that they watched the original in the 1970s and 80s. It would be nice now to watch the new version with our kids, as we now do with the re-imagined Doctor Who.

Thanks for commenting on this! I've thought further about the show (and your own comments) on my blog at http://exploringourmatrix.blogspot.com/2007/09/thats-not-me-more-on-bionic-women.html

You hit the target with your comments on parents wanting to share something from their childhood w/ their own. I was disappointed in that respect.

I thought Ryan's fight scenes were weak. Logic says the evil one with more/stronger "bionic ability" should kick Ryan's behind, also. What about the love interest?..he alive or dead?

I'll keep watching, but I hope for some improvement.