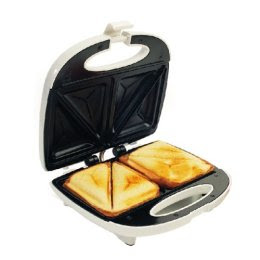 In our family we have always been big fans of a great British delicacy called "toasted sandwiches", also known as "toasties" or, if you are from certain regions in the North of England, "Brevilles", named after the maker of the machine that does the toasting. I've been eating them for over twenty years. When I was a student, toasted sandwiches were pretty much my staple diet. They were cheap (e.g. one can of beans @ 3p, one loaf of wholemeal bread @39p plus butter), reasonably healthy and very easy to cook in my student room at Exeter College, Oxford. In fact, I often used to play host to friends for a feast of toasted sandwiches and my home-made bitter, brewed on the premises to the horror of my scout, Sheena.

We are now steadily introducing toasties to our the kids' American friends, so far with one hundred percent success. I should explain to American readers that the toasted sandwich maker seals the sandwich, which means that you can put in there all manner of things you could not think of putting in a normal sandwich, like baked beans, chilli, or spaghetti-0s (= spaghetti hoops). Equally, traditional sandwiches like ham and cheese work really well in a toastie too. Or try pasta shells and sweetcorn, a particular favourite of mine. And with a little mayonnaise and chilli pickle on the side, you have a lovely meal.

You can't beat cheddar cheese with ketchup and a dash of worcester sauce on a toasted sandwich. Mmm.

I fear for Steven's sanity- as that sounds really disgusting. But I do admit that the baked bean sandwich sounds delightful. I'll have to hunt down one of those sandwich machines and make a tuna and chicken sandwich.

So taosted sandwiches are not like grilled cheese sandwiches? Bean sandwiches ... and they say the English don't do cuisine ;-)

My favourite which comes from my NZ hubby is to chuck all everything into a large bowl (cheese, sweetcorn, onion etc. - the more the merrier) and then a raw egg. Beat it all up and hey presto omelette-style toastie - awesome!

They looked perfect, yet when bitten they would engulf the victim in a scalding jet of steam and contain no discernible edible filling.

You'll be back to soya cheese next, and those orange lentils that sat in the garden of Div Road for about half a term...